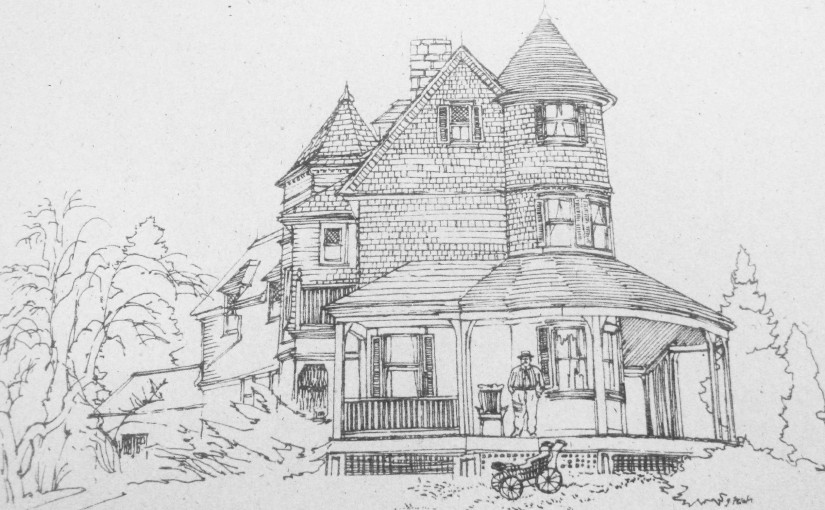 While Eliestoun holds a special place in the hearts of many students of Principia College, it also holds a special place in architectural history as one of the few remaining examples of shingle-style architecture in the entire St. Louis area. Eliestoun was built by Henry Turner Jr and his wife, Ada Ames, daughter of Lucy Semple Ames of Notchcliff. Turner purchased the Starr farm adjoining the Ames estate to build his own country home and live the life of a “gentleman farmer.” Ada’s grandfather, James Semple, was the founder of Elsah, which placed Ada as a leading member of society in St. Louis and Jersey counties. The young family with their five-year-old son, Edgar Ames Turner, moved into the house in April of 1890.

Turner hired an architect from the East who had previously worked as a draughtsman for Henry Hobson Richardson, whose style also influenced the well-known architect, Frank Lloyd Wright. The architect was Alexander Wadsworth Longfellow, nephew of the famous American poet. The grounds were designed by J. Wilkinson Elliott. Elliott included his plans for the Eliestoun grounds in his book entitled, A Plea for Hardy Plants. Elliott is also known for designing Tuxedo Park in New York for Pierre Lorillard Jr.

When Principia began moving the college to Elsah in 1930, Eliestoun at once became important. The main house was one of the few buildings on the campus suitable for immediate use. While dormitories and other structures were being built (1931-1935), guests at Eliestoun included architect Bernard Maybeck and his wife Annie; the founder of Principia, Mary Kimball Morgan; Principia Director Frederick Morgan; and other staff members. Eliestoun served as the official residence of the President of The Principia until 1959, when it housed single staff women for several years, and then students in various academic programs.

What is your history with Eliestoun? We would love to hear your story! Go to Friends of Eliestoun on Facebook and post what Eliestoun means to you.

Drawing above by Glenn Felch (used with permission).